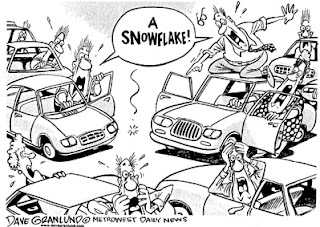 As usual a few flakes of snow and everyone panics. It seems drivers today have no idea of how to drive in snow. They feel themselves sliding or their wheels spinning and try to correct this by braking hard or accelerating. Both being the wrong way to correct things. The trick when driving in snow is to drive as though you have a wineglass which you don't want to spill, balanced on your dashboard. You don't brake hard and neither do you accelerate or turn sharply.  Leave a much bigger gap between you and the car in front and watch out for people who could slide into you. With good tyres and a little bit of care a small amount of snow - say less than ten inches, shouldn't stop you.

I do however remember an extremely bad winter. That of 1963. It was bitterly cold, the coldest on record, and it snowed in a big way! 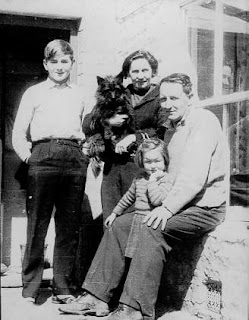 That year I was living on a hill farm in the North Pennines. The first I remember of that winter was when my father opened the front door and was met by a solid wall of snow. The previous five winters at the farm had taught us to keep a shovel inside the house so a few minutes digging got us outside. There had been a heavy snowfall. Added to that a howling wind had picked up most of the snow on the fells above us and blew it all into drifts in the valley where we lived. It was one of those drifts which buried our front door and the window of our sitting room. The picture shows our family standing outside that door and window later that summer. That's me on the left.

We had to dig our way across the farmyard to the cow byre to feed the cows and while we were doing that the postman arrived. He had made it as far as our lane but had then given up. He left the mail for the village of Carrshield at the Chapel below our house saying 'If anyone gets here from there or goes there - ask them to take it'. Carrshield was a mere 2 miles from our house, further up the valley so to a 14 year old boy that was a challenge. I got prepared. By then we had learnt to wear two pairs of jeans, one inside our wellingtons and one outside. Not only did that keep out the bitter wind but it also prevented snow from getting inside wellingtons. I put on a thick pullover, mits, Woolen hat and two jackets, one with a hood. Looking like the Michelin man I made my way down the lane to the chapel, struggled to put the post bag over my shoulder and marched off into the blizzard. 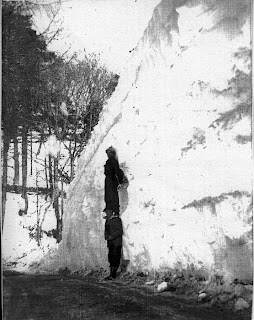 About 200 yards further the road went through a series of bends, through a small wood and over a small stream. It was there I met one of our neighbours, Roland Johnson, trying to dig out his Landrover which had got stuck in the snow. I gave him a hand and he turned back towards his home. I continued up the road - or at least what I thought was the road since the snow had completely covered it, the wall at the left and the fence at my right. It was hard going since the snow was soft and deep. I sank up to my thighs in it and began to think plans for making a set of snow shoes out of old tennis rackets.

About another 20 yards and I got tangled up in something buried in the snow. Fence wires? Nope it was telephone wires still attached and normally 20 feet in the air. That's when I gave up! Carrshield's mail could wait. 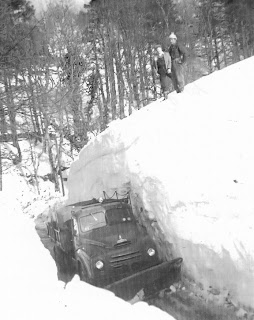 The snow there turned out to be 22 feet deep after it had packed down and been dug out. One of the pictures I have of it shows my brother-in-law, Colin Graham, standing on the shoulders of a friend, Brian Myers, next to the drift. As you can see the snow still towers above them.

It took gangs of men three weeks to dig their way to Carrshield. Even then there was one road which remained closed even longer where it went through a cutting which had been completely filled with a 44 foot deep snow drift. 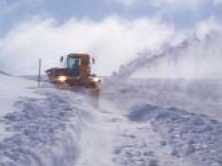 As to that 44 foot drift; 1963 was the first year the council tried out snow blowers. They imported one from Switzerland, brought it by low loader to Hexham then drove it from there towards that drift. About 200 yards from it it broke down and the drift had to be cut out by men with shovels and mechanical diggers.

Incidentally those snow blowers made keeping the roads open much easier. They did flatten a few greenhouses though until the council erected signs saying 'Snowblower - Blow left'. The guide wheel they used left a track which we all learnt to avoid - get your foot in that on a slope and it was like wearing ice skates. 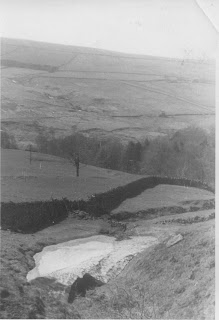 It took a long time for the snow to melt that year. In June, when I came home at half tern for a holiday there was still snow in places.

Now if it should get as bad as this again here are a few tips about driving:

If this post has been of interest to you would you do me a favour in return? Download a FREE copy of the book I co-author - a romantic technothriller called 'A Vested Interest'. Even if you don't read it it will help our ratings. You can get it at http://smarturl.it/avi and if you want to read it, you can use a phone, a tablet, a computer or even a Kindle.

Wowee ... that's serious snow! Thanks for all the driving tips ... now if we could just get the "other" people on the road to read them! LOL Unfortunately, I have a feeling that snow will miss us this year.

Typically it's not really the snow that gets me or my hubz --- it's the ICE! We had to drive into town today and the salt trucks hadn't been out yet, so the roads were extremely slick, and although we did manage to stay straight, we sure did scoot around quite a bit! We also passed an accident that looked very bad, and spent a few moment of silence during our trip to send some good vibes their way. It's been a strange winter here in Ohio!

Those snowdrifts are incredible to see. Great story.