How to fix the mess the government is in. 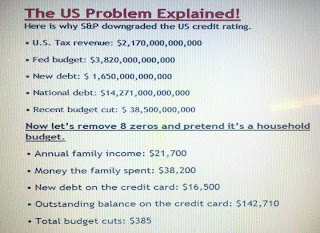 Now of course someone was quick to point out that this would matter if the US was on the gold standard but that had stopped long ago. The problem is that the vast majority of people have this sneaking impression that if you spend more than you earn you are heading for disaster. No amount of explanations from economists will ever convince them otherwise either.

It's not just the US. Things aren't quite that bad in the UK; here we are only 146 billion in the red. Taking into account the US has five times the population of the UK that equates to 730 billion by US population standards.

So do these guys in government know what they are doing? Ask 'the 99%' and the answer will be a resounding 'NO!'

So what could we do about this? It seems simple to me - we change the form of government so that people who actually know what they are doing run the country instead. After all the last person who should be given the job of President or Prime Minister is the egomaniac who wants to do the job and tries to convince us that although he/she is not qualified, we should elect them.

So here's my suggestion. Make a selection of the top five industrialists - those that make the most profit and tell them it's their duty to run the country on our behalf for the next four years.

"...but what about democracy?" I hear you say. No problem. Allow the candidates selected to campaign and we then use standard election procedures to make the final choice. Of course there will be one subtle difference. None of the candidates will want the job and will therefore campaign for their opponents instead of themselves. As a result there will be no 'mud slinging' and no need for campaign fund raising. (Believe it or not but all these idiots politicians are currently asking me to give them £10/£20 to fund their next election campaign!) The candidates will fund their campaigns themselves - these people are rich. That may be a little unfair but they can afford it and anyone who manages to be so successful really has a duty to make the lives of the less able (us) better. Look on it as a minor tax which will help reduce those budget deficits.

How about local government? Use the same method, just apply the requirements on a local scale.

What incentives should we offer these people? If they do a good job and the electorate feel their lives have improved then we'll undertake never to elect them again! Fail and they still could be elected for a second chance.

The bad news is there's one tiny fly in the ointment. To modify government like this would require our current politicians to accept it. There is NO WAY they will ever vote themselves out and we are stuck with the present system.
Posted by John Chapman at 7:54 pm

This is actually kind-of brilliant. I can think of a few picky tweaks I'd make, but since the whole thing will never come to pass for the reason you mention, that seems pointless. Instead, my compliments on a great idea for the age-old problem of finding the people who least want the job; it might not really mean they are the most qualified, but it almost certainly makes them better than what we've got!

Brilliant idea! It might not necessarily find the most qualified candidates, but it would certainly find people more qualified than those who choose to run!

Bearing in mind that, though desirable, this system of government relies on approval by people who would then lose their job, I tried again. Here's a link to my second attempt to reform government:
How to fix government (version 2)